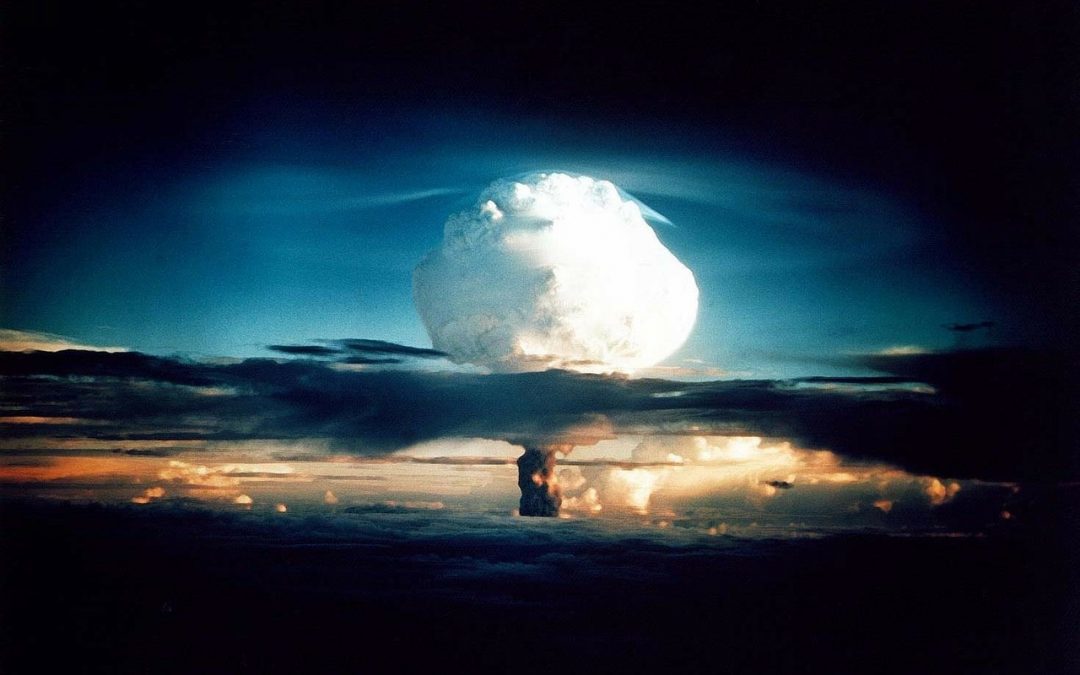 Introduction
Nuclear weapons are the deadliest form of man-made destruction our planet has ever known. They are unlike any other weapons, both in the scale of their devastation, and in the spread of damaging radioactive fallout. They are also the only weapon of mass destruction not prohibited by international law—chemical weapons, biological weapons, anti-personnel landmines and cluster munitions are all expressly prohibited.

The United States was the first country to develop nuclear weapons, and remains the only nation to have used them in warfare—dropping atom bombs on the Japanese cities of Hiroshima and Nagasaki at the end of World War II. The weapons killed 210,000 innocent civilians, and injured many more.

The nuclear weapons of today are much more powerful than those dropped on Japan in 1945. A single modern warhead, if detonated on a large city, could now kill millions of people, and the effects would persist for decades.
Nine countries are currently nuclear states: Russia, the United States, France, China, the United Kingdom, Pakistan, India, Israel, and North Korea. Together, they possess approximately 15,000 weapons. The United States and Russia alone maintain roughly 1,800 nuclear weapons on high-alert status, which are ready to launch in minutes.

Our collective failure to disarm these nuclear powers has heightened the risk that other countries will acquire nuclear weapons. Although the leaders of some nuclear-armed nations have expressed their vision for a nuclear weapon-free world, few have developed any detailed plans to eliminate their arsenals.

It is in the interest of the plant to abolish nuclear weapons. Yet after years of trying, these nine nations still have the ability to make use of atom bombs to inflict devastation on other nations.

3 reasons why eliminating nuclear weapons has proven to be so difficult:

1) The myth that nuclear weapons characterize a “great power”
Often, nuclear weapons are conflated with national security. These countries use the destructive power of their arsenal to throw their weight around on the geopolitical stage. “You better respect me or I will blow you off the face of the earth” is an unstated message of great power diplomacy.

Organizations such as the International Campaign to Abolish Nuclear Weapons and SANE, have organized demonstrations and conducted advocacy to convince political leaders to support anti-nuclear treaties. These efforts have met with some success, as will be described later, but ultimately failed to make significant inroads in the denuclearization of major powers. The leaders of these countries are afraid to give up their nuclear weapons unless other countries do the same. They have been unwilling to make the commitments needed for a nuclear free world.

MAD is based on the concept of deterrence, which holds that the threat of using strong weapons against the enemy prevents the enemy’s use of those same weapons. Under MAD, each side has enough nuclear weaponry to destroy the other side. Either side, if attacked for any reason, would retaliate with equal or greater force. The expected result is an immediate, irreversible escalation of hostilities resulting in both combatants’ mutual, total, and assured destruction.

The application of this doctrine started during the Cold War (1940s to 1991), in which MAD was seen as a means of preventing a wholesale conflict between the United States and the Soviet Union while they engaged in smaller proxy wars around the world. It was also responsible for the arms race, as both nations struggled to keep nuclear parity, or at least retain second-strike capability. Although the Cold War ended in the early 1990s, the MAD doctrine continues to be applied to currant great power relationships.

3) The rise of national populism and authoritarian leaders

The risk of the use of nuclear weapons is enhanced in countries where authoritarianism is replacing democracy as a way of governance. Countries with democratic systems have more checks and balances in place to prevent a national leader from making an impulsive decision to trigger his or her nuclear arsenal.

Progress
The global community has made some progress in controlling the use, testing and spread of nuclear weapons. Examples include:

1) The Comprehensive Nuclear Test Ban Treaty (1996), which prohibited all test detonations of nuclear weapons except for those conducted underground. This treaty has not entered into force, as eight countries have yet to sign, including the United States, China, Israel, and Iran.

2) The Strategic Arms Limitation Agreements (SALT) (1969 and 1972) and the Strategic Arms Reduction Treaties (1991,1993, 2011) between the United States and Russia. Under SALT II, for the first time, the United States and Soviet Union agreed to limit the number of nuclear missiles in their arsenals. Under the START Treaties the US and USSR agreed to reduce the production of strategic offensive arms.

3) The Treaty on the Non-Proliferation of Nuclear Weapons: (1968 and 1995). This treaty, known as the Nuclear Non-Proliferation Treaty has been signed by five major nuclear powers—the United States, Russia, China, France and the United Kingdom. Four UN member states have never accepted the NPT, three of which are thought to possess nuclear weapons. They are India, Israel, and Pakistan. The NPT non-nuclear-weapon states agree never to acquire nuclear weapons and the NPT nuclear-weapon states in exchange agree to share the benefits of peaceful nuclear technology and to pursue nuclear disarmament aimed at the ultimate elimination of their nuclear arsenals.  This has resulted in a great deal of tension as non-nuclear power countries who think that nuclear countries need to divest themselves of their weapons just as much, if not more, that non-nuclear power countries agree never to develop them.

A Global Perspective
The famous Doomsday Clock, kept by the Bulletin of the Atomic Scientists, has recently been moved to two minutes to midnight, over concerns about nuclear weapons and climate change. According to Rachel Bronson, president of the Bulletin of the Atomic Scientists, “this is the closest the Clock has ever been to Doomsday, and as close as it was in 1953, at the height of the Cold War.”
To turn back the Doomsday Clock, we must make the elimination and destruction of nuclear weapons a priority for our planet. This objective should be pursued regardless of the political opposition from nuclear power states and the arguments put forward on behalf of theories such as Mutually Assured Destruction(MAD).

There have been some recent promising steps towards denuclearization. On 27 October 2016, for example, the First Committee of the UN General Assembly adopted resolution L.41 to convene negotiations in 2017 on a “legally binding instrument to prohibit nuclear weapons, leading towards their total elimination”. The voting result was 123 nations in favor and 38 against, with 16 abstentions. Unfortunately, the major nuclear powers—USA, France, Canada. Israel, and Russia—all voted “no,” and follow-up negotiations have been postponed indefinitely by the General Assembly.

While proponents of disarmament and denuclearization seem to be in the minority at the moment, they must not fall silent. Nuclear weapons are a relic of an outdated world order based on national sovereignty and the rights of sovereign states. However, the rights of countries to protect themselves with nuclear weapons gets trumped when we have an interconnected and interdependent world that needs to operate free from the threat of self-imposed mass annihilation; a world that needs to build community and trust between its peoples and member states, not fear, intimidation, and suspicion.